How to change the alarm’s volume

How to make your iPhone alarm louder

Your iPhone relies on one accessible slider in Settings to control the overall volume of your alarm. Just beware that this is also your phones ringer volume, so you should choose a level thats appropriate for both.

1. On your iPhone, start the Settings app.

3. In the Ringer and Alerts section, drag the slider to the right to increase the volume. 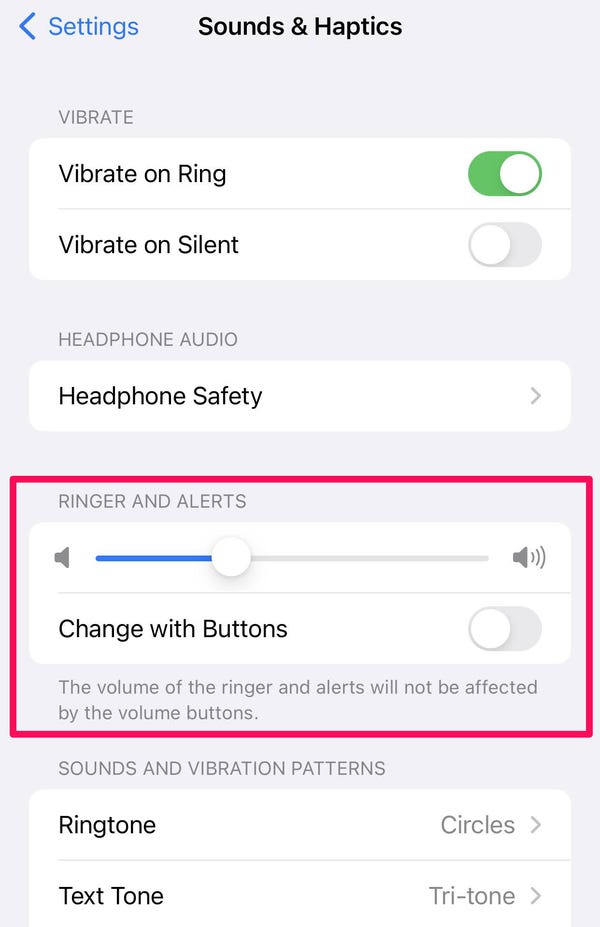 By default, the volume buttons on the side of your iPhone do not control the ringer and alerts volume (which is also the alarm volume). But you can enable this, which makes it easier to quickly adjust the volume at bedtime. In the Settings app, tap Sound & Haptics, then in the Ringer and Alerts section, turn on Change with Buttons by swiping the button to the right. Just be sure you dont accidentally lower the volume using the buttons.

Why you sleep through your iPhone’s alarm

When I first switched from and Android to an iPhone ( ), I slept through all my alarms for a week. The reason? I wasnt sure. My alarms were set, but they just werent waking me up. It wasnt until I woke up during one of the alarms (by chance), that I realized my iPhones alarm volume was ridiculously low.

Heres why: iOS has two different volume controls – ringer volume, which controls the volume for the ringer, notifications and system alerts, and alarms; and media volume, which controls the in-app volume for games, music, and videos in addition to calls. Because your alarm volume is tied to your ringer volume, you could be inadvertently muting your alarm by changing it before you go to sleep.

You can check how loud your alarm will be from the alarm settings screen. To do this, open up the Clock app and go to Alarm. Tap Edit in the upper left corner, and choose the alarm you want to check. Tap Sound and then tap the alarm tone you want to use.

If the volume meter on your screen is labeled “Volume,” and not “Ringer,” you may have your phone set up to only adjust media volume via the volume buttons. To fix this, go to Settings and then Sounds & Haptics. Under Ringer and Alerts, youll see a toggle switch labeled Change with Buttons. Switch this toggle on to adjust your phones ringer volume with the volume buttons.