Hinge vs Bumble: What is the best dating app? (Image credit: Hinge)

In one corner we have Hinge, a strong contender in the dating app world, with an interface that pushes personal connections and forces the user to make more effort with their profile than ever before.

A series of question prompts like “I won’t shut up about…” allows users to start conversations with something other than a basic “hey.”

Both Hinge and Bumble ranked among the fastest-growing dating apps in the US for 2020. Hinge took the #1 spot, Tinder came in 2nd and Bumble was 4th.

Hinge may be growing the quickest, but it’s got some catching up to do – Bumble is the 2nd most popular dating app in the US, right behind Tinder.

If you’re basing your decision on which dating app to use solely on the number of potential matches, Bumble is better than Hinge.

Bumble wins the overall popularity contest, but you also want to consider how popular a dating app is with people in the age range you want to date.

Hinge’s fastest-growing demographic is singles in their mid-20s, specifically ages 22 to 26. Its broader target market is millennials, with almost 50% of users under 30, and most of the rest under 49.

If you’re dating over 50, try Bumble first. Hinge is slightly more popular with users 30+, so if that’s you, Hinge may give you an advantage. 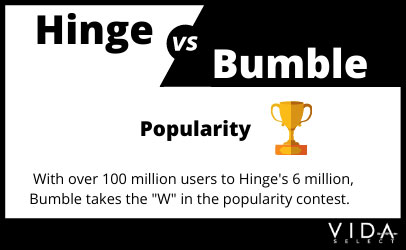 Bumble is better than Hinge when it comes to your potential match pool – it has far more users overall.

Both Bumble and Hinge are geared toward dating, not hooking up. You’ll find most of your potential matches are looking for a relationship. Hinge in particular – their entire marketing campaign revolves around “designed to be deleted.”

Bumble allows you to filter for singles looking for “something casual”, but as app founder Whitney Wolfe Herd explained, “We’re not one of our competitors that’s just trying to hook people up.”

Hinge abandoned the swiping format altogether a few years back, which boosted user engagement significantly. When it was a swiping app like Tinder, 1 in 10 matches actually talked to each other. That jumped to 50% of matches engaging with other on the app after the redesign.

One of them reveals who has liked your profile already – a feature most other dating apps charge a premium for. Although to see them all at once, you do need to upgrade. If you’re a free user, you must scroll through them one at a time.

As Hinge exec Amarnath Thombre explained to MarketWatch, “The core appeal of Hinge is seeing who liked you.”

Your “Discover” feed displays singles who fit your specified criteria, and a curated group of “Standouts” comprises the third feed (more on that in just a bit).

But no matter where you’re looking, you can only “like” a maximum of 10 people each day. Any more than that requires a premium subscription (more on that coming up).

You must like or pass a profile before viewing the next one. 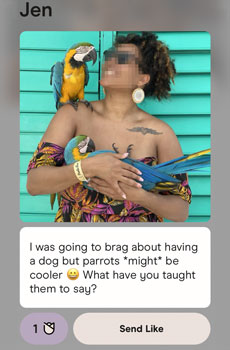 You can “like” and comment on any part of a users profile, whether it’s a photo or a prompt answer. That makes it easy to start a conversation on Hinge, which is the whole point of the more interactive format.

Bumble has 3 “Modes” – one for dating, one for friendships, and one for business networking.

In Dating Mode, users swipe their way through a match feed, just like on Tinder. When you and someone you’re interested in swipe right on each other, a match is formed.

Bumble allows free users to swipe right – or “vote”, as they call it – around 100 times every 24 hours. For unlimited swiping, you’ll need to upgrade. 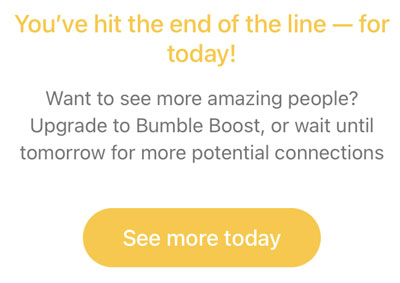 Once you’ve matched, Bumble sets itself apart from rival dating apps with one huge twist. Only women can send the first message. The exception is same gender matches, then either person can send the icebreaker.

A huge proponent of female empowerment (especially in the tech space), founder Wolfe Herd envisioned a Tinder that was “female friendly”. Women on Bumble don’t have to wade through piles of unwanted messages from men – especially lewd or obscene ones.

So women make the first move – but there’s a clock ticking. The icebreaker has to be sent within 24 hours, or the match expires. Men then have a day to respond, or the same thing happens.

Both halves of a match have one chance to put another 24 hours on the countdown, but extending more than one match per day requires a premium subscription. 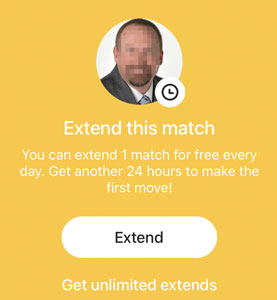 Bumble doesn’t allow men or women to send a message before matching, although you can react to a prompt or photo in someone’s profile by sending an emoji. The emoji will be displayed if the other person swipes right. 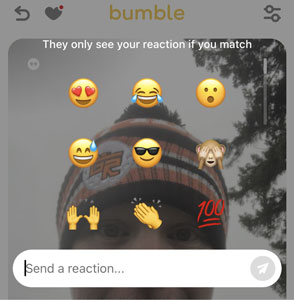 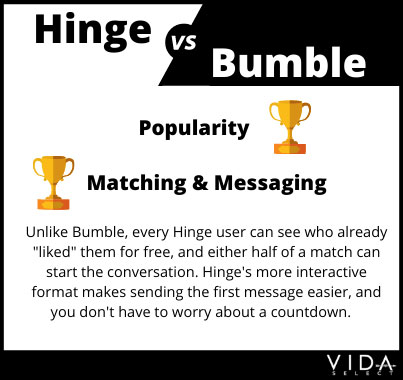 Hinge is better than Bumble for guys when it comes to matching & messaging. With the right messaging strategy, you can send the type of icebreakers women want to see.

57% of men said they don’t receive enough messages on dating apps, and that’s a frustrating position to be in when you’re not in the driver’s seat..

The ability to send a message before you’ve actually matched can be a game changer for some men, so much so that it’s a premium perk included in Tinder Platinum.

Plus, a personalized message in response to a prompt answer or profile pic is relatively easy to write on Hinge. If your profile & photos aren’t enough to convince someone to match with you, a great Hinge message could push them over the fence.

For women, it depends on how you feel about *always* having to start the conversation. Only 30% of single women indicated they got too many messages in a recent Pew survey, so if that’s not an issue for you why not let guys reach out too?

As Fast Company theorized, “A lot of women believe that making the first move is just too much work, and they would prefer to open up their dating app and see a bunch of requests.”

If you’re looking for a dating app that serves up profiles of men who have already liked your profile, you may want to consider Coffee Meets Bagel as well.